Tesla CEO Elon Musk introduced the company's latest supercar on Tuesday: the Model X. It's an all-electric SUV that accelerates like a sports car.

Musk spent a lot of time touting the safety features of the Model X, arguing that it has dramatically better crash safety than competing SUVs. Advanced sensors and software can detect an impending crash and automatically apply the brakes. And Musk says the car has the industry's best air filters, including a "bioweapon defense mode" to prevent bacteria, viruses, pollen, and other pollutants from entering the vehicle. 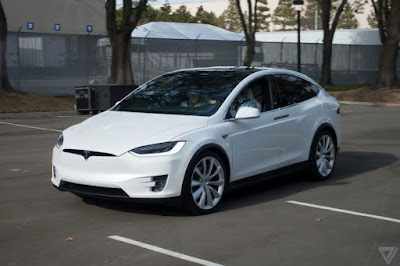 The most visible innovation in the Model X is the falcon-wing doors. Instead of swinging outward as they do on most SUVs, the rear passenger doors on the Model X swing upward.

But before you get too excited, the Model X has sports car pricing to go with its sports car acceleration. On Tuesday, Musk unveiled a 90D model for $132,000, a P90D model with a "Ludicrous Speed" acceleration mode for $142,000. A tweet from Musk indicates that "lower cost versions" are "coming later."

The Falcon-Wing Doors
Unlike normal car doors that swing out to the side, the rear passenger doors on the Model X swing up. In the past, this kind of door has had a big problem: If there's an obstacle next to the car — like another car — it can block the door from opening.

Tesla solved this problem by adding an extra set of hinges to the middle of the doors. That allows the doors to swing upward without swinging out very far:

Source: www.vox.com
by : Timothy B. Lee
Posted by Alegra Broadband at 08:35