Li-Fi has just been tested in the real world, and it's 100 times faster than Wi-Fi
Sorry, Wi-Fi. We had some good times together.

Expect to hear a whole lot more about Li-Fi - a wireless technology that transmits high-speed data using visible light communication (VLC) - in the coming months. With scientists achieving speeds of 224 gigabits per second in the lab using Li-Fi earlier this year, the potential for this technology to change everything about the way we use the Internet is huge.

Li-Fi was invented by Harald Haas from the University of Edinburgh, Scotland back in 2011, when he demonstrated for the first time that by flickering the light from a single LED, he could transmit far more data than a cellular tower. Think back to that lab-based record of 224 gigabits per second - that's 18 movies of 1.5 GB each being downloaded every single second.

The technology uses Visible Light Communication (VLC), a medium that uses visible light between 400 and 800 terahertz (THz). It works basically like an incredibly advanced form of Morse code - just like switching a torch on and off according to a certain pattern can relay a secret message, flicking an LED on and off at extreme speeds can be used to write and transmit things in binary code. 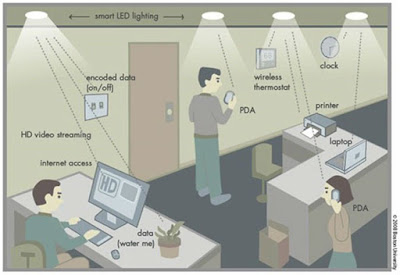 And now, scientists have taken Li-Fi out of the lab for the first time, trialling it in offices and industrial environments in Tallinn, Estonia, reporting that they can achieve data transmission at 1 GB per second - that's 100 times faster than current average Wi-Fi speeds.

"Currently we have designed a smart lighting solution for an industrial environment where the data communication is done through light. We are also doing a pilot project with a private client where we are setting up a Li-Fi network to access the Internet in their office space.”