#SuperBloodMoon Did you miss it?

Take a look at some pic of the #SuperBloodMoon 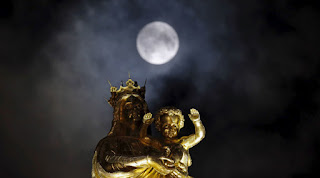 A supermoon rises in the sky above the Notre-Dame de la Garde basilica in Marseille, France, September 28, 2015. © Jean-Paul Pelissier / Reuters

An event that occurred only five times in the 20th century – created quite a stir on social media. Spectators hurried to post fascinating photos of the reddish supermoon, as the next one is expected only in 2033.
The celestial phenomenon took place for the first time since 1982, according to NASA. Instagram addicts had to take to their cameras immediately as the next suchlike event will take place in 18 years.

The bloodmoon was seen in North and South America, Europe, Africa, and some regions of West Asia and the eastern Pacific. For more than an hour, the Earth came between the sun and the moon and its shadow almost swallowed up the lunar disc.

Posted by Alegra Broadband at 02:18